The Democratic Party is Imploding Before Our Eyes

As we move inside the 60 day mark until the 2020 general election, there are some things firming up that the parties are going to be stuck with. I say this because 8 weeks is a lot of time for some event to happen. And the Democrats and their henchmen in major media have already started their attempts at an 'October Surprise'. They tried that several times in 2016, to no avail. Their nuclear weapon, of course, was the decades-old secret recording of Mr. Trump joking around in private using boorish locker room talk about how women treat celebrities different than regular guys. Democrats and the media had their narrative and outrage machine ready to roll, just like all their previous attempts at sinking trump with a manufactured scandal and faux outrage. To this day they remain in stunned disbelief that it bounced right off him.
The reason it didn't make any difference is because the GOP base - Trump's voters - quit caring what major media had to say long before that. Like every other attack, it was dishonest. However rude his comments about generic women, they amounted to less than nothing in comparison to the Clinton campaign and major media's treatment of specific women in Bill Clinton's trail of victims from Arkansas into the White House and beyond. Seriously, Clinton campaign staffer George Stephanopolous can be heard on a recorded phone call saying far worse to a reporter, threatening her to keep her mouth shut and promising to destroy her future if she keeps digging into all the sexual allegations against Bill Clinton. At one point in the call (from the documentary 'The War Room' about Clinton's 1992 campaign) George threatens to make up a list of names the reporter has had illicit sex with just as a smear. George is now, of course, a celebrated member of the fake news media at ABC News and treated as a serious journalist by others in major media who pretend to be journalists themselves. So the media's clutching their pearls and rushing to their fainting couches over bawdy talk about nobody in particular, in private, between some guys, secretly recorded, over a decade before didn't come across as authentic outrage. Everyone knew the media and Hillary were just pretending to be shocked and outraged. The Clintons' treatment of women, and that of their fawning media and their campaigns, pretty much sunk that issue as one the media or Clintons could ever leverage against anyone.
But it's an example of how the Democrats and their media roll. Expect tawdry stories and made-up scandals every week or so during the home stretch. Late last week The Atlantic came out with a article saying President Trump hates the military and service members, calling dead U.S. troops buried in national cemeteries in Europe "losers" and "suckers", and that the President demanded disabled veterans be taken away from him because he's disgusted by them and didn't want them in photos or video with him. As of this writing the reporter can only cite "anonymous sources", but President Trump has angrily denied it, pretty much everyone who was there when he allegedly made the statements has strongly denied the President has ever said anything like that, nor would he. John Bolton wrote about the incident (the weather cancellation of plans to attend an event at the ceremony) in his book and denied ever hearing anything of the sort. And several people, including Bolton, said it would be outrageous for anyone to call Marine Corps war dead "losers", especially in the presence of General Mattis and General Kelly. So, basically, it was a lie. Nobody believed the lie who didn't already hate the President and want it to be true.
As every other attack launched at him by the lying media, it completely failed. But you can be sure there are many more lies they're cooking up to try to get something to stick.
The strange thing is that it never seems to occur to the left to come up with some policy ideas that the American people might like. And then try to go sell those ideas in stump speeches and debates. Democrats haven't done anything like that in years. Their pitching Obamacare back in 2008 was the last time Democrats had an actual policy to talk about. They rammed it through in 2010 and then were blown out in the November elections that year. Obama really didn't have to run in 2012 because Mitt Romney was such a horrible opponent. Hillary's entire campaign was built around the idea that it was "her turn" and that she has a vagina. No policy discussion or ideas whatsoever. Trump's four years as President have seen nothing but silly attempts to make up a scandal, only to fall flat on their faces over and over. They tried the Russian collusion hoax, Stormy Daniels, Michael Cohen, the impeachment fiasco, the economic shutdowns, the pandemic, BLM/antifa riots and now the Trump-hates-the-military lie. Impeachment is actually fascinating, because Democrats spent every ounce of energy from 2016 until this spring focused on figuring out a way to impeach President Trump. It was a spectacular failure, of course, but it seemed like they would at least have it as an issue to talk about. Not one of them mention it, though. They're completely avoiding the topic altogether.
So, they don't really have anything to talk about. They're floundering around, just spitting insults at President Trump and making generic speeches. "We need to come together! This is an important time and we'll fix the problems that my opponent caused!" 🙄 They talk like they raided a H.S. library and cribbed all the student council campaign speeches.
The virtual Democratic National Convention was a snapshot of their entire party right now. It was amateurish and content-free, insofar as policy goes. It looks like it was put on by 7th graders. And there were likely as many people tuning in to laugh at them as enjoy the event. 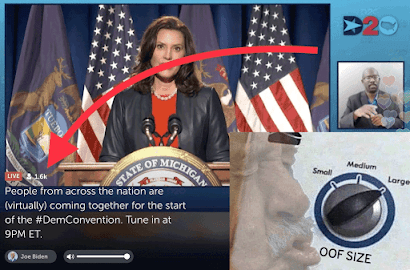 There must be 1000 of these screenshots out there. Democrats have had a style-over-substance problem for 35 years where they just make up obvious lies and pretend it’s true/hope it comes true. It’s like they decided running Nixon out of office worked pretty good, so they’re going with nothing but demonizing the other side with outrageous accusations that are obviously not true and rely on the media to help them squeak out a win. It’s all incredibly short-term thinking and I think they’ve finally run their party into the ground. 2016 showed how people were sidestepping the lies of MSM. The left’s shameful attempts to silence disagreement on social media is a last desperate grasping to keep things going just one more election. These embarrassing numbers and hilarious mocking are evidence their politics-by-outrage sham is imploding. It’s surprising it went on this long. Shows how powerful the MSM used to be.
It shows how fake their show is. These things we’re seeing are the embarrassment of them tryin to continue to pretend there’s broad support or any excitement for them. I’d say their policies, but they don’t have any, apart from little niche things to get some grievance group or another on board. Obamacare was the last policy they had to champion. 10-12 years ago! Since then it’s been 1.) Defend the black president from "racists"; 2.) Defend the female presidential candidate from "sexists", and; 3.) Do the opposite of whatever Orange Man says. These aren’t policies. There's nothing to vote for. Democrats have literally gone over a decade without giving anyone any motivation to vote FOR them. Just against the bad people on the other side. That’s not sustainable. I think we’re seeing it all crash in here. 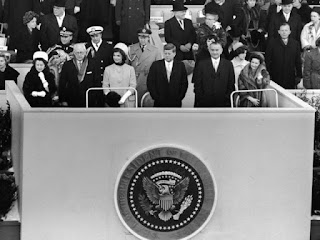 This picture is on a story over at Breitbart. It’s unreal the difference between Democrats between this photo and the blue-hair crossdressers and America-hating communists throwing confetti in a fake celebration of a dem candidate. The angry buttheads rioting outside the 1968 convention are the establishment and their grandchildren are wearing dresses, burning American flags and calling for communism. It’s surreal.
I'll leave you with the grande finale of the Democrats' presidential nomination:
Posted by Sean Harshey at 5:43 PM