Things are getting worse.
Last Saturday night, self-described "100% antifa" rioter Michael Reinoehl was on the streets Portland during their nightly rioting, burning and looting. In a video, another rioter can be heard yelling (paraphrased) "Hey! We got one! This one here is a Trump guy!" Reinoehl walked up to Jay Danielson, who was wearing a "Patriot Prayer" hat, and shot him dead with a handgun, then ran away.
Reinoehl had been arrested twice just in the past few months. Once driving over 100mph and found to be drunk and in possession of drugs. The antifa-friendly prosecutor dismissed his charges.
Then on July 5th, Reinoehl was arrested near the federal courthouse in Portland where rioters were throwing Molotov cocktails and shooting fireworks in an attempt to breach and burn down the courthouse. In addition to fighting police, once Reinoehl was wrestled to the ground, he was found to have a loaded handgun a large hunting knife. He was released and charges were dismissed again. 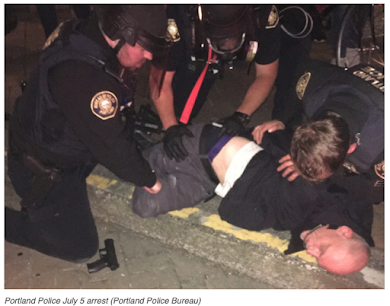 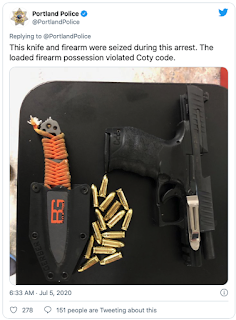 In a statement, Democrat Joe Biden excused one of his street fighters killing a Trump supporter by blaming the President and claiming Trump supporters are provoking antifa. Although there was no indication anywhere Danielson had done or even said anything to anyone, Biden claimed Trump supporters are "spoiling for a fight". Major media dismissed Danielson's execution as "a man died in a clash between Trump supporters and peaceful protesters". As far as anyone can tell, the "clash" was simply Danielson wearing a Patriot Prayer hat which caused rioters to single them out for attack.
After going on the run, Reinoehl gave an interview to Vice where he claimed he was the real victim because he was now "being hunted". He claimed he had no choice but to kill Danielson because he claimed Danielson was likely going to kill some people of color. He didn't elaborate and there's nothing in the video of the encounter, so we can presume his claim was just a self-serving lie. The fact he was hiding from police and apparently trying to get some of the same support pouring out for Kyle Rittenhouse who shot three antifa attackers in Kenosha, WI as they chased him, shot at him, beat him on the ground, tried to wrestle away his rifle and charged at him with a gun.
On Thursday, Reinoehl was killed in what appears to have been a shoot-out with federal officers from the U.S. Marshals' Fugitive Task Force near Seattle, WA. Police confirmed Reinoehl pulled a gun when approached by officers and a neighbor reported hearing 30-40 shots fired.
The antifa killing Danielson last weekend and the subsequent public celebrations by BLM & antifa rioters was just the beginning.
Now that the door to executing Trump supporters has been opened, there’s going to be more. We know this from the silence, excusal or celebration by everyone on the left. They’ve previously walked right up to the edge, with getting in people’s faces at restaurants and beating up people here and there. The attacks on elderly people and federal officeholders who attended the President's nomination acceptance speech at the White House is another example of the escalation. The gate’s now open on killing Trump supporters for no other reason than they do not support the left's communist revolution. In addition, they’re emboldened by local officials' weaponization of the legal system against victims of the communist mobs. Besides Democrat prosecutors in places like Seattle, Portland, St. Louis and Minneapolis refusing to press charges against antifa and BLM rioters for acts of violence and destruction, they are helping the rioters by fully prosecuting anyone resisting the communist mobs. While rioters know they have the protection of local officials when they burn, loot, destroy or even kill, they also know anyone who resists them will be arrested, jailed and prosecuted. Kyle Rittenhouse in Kenosha, the McCloskeys in St. Louis and several ordinary people who refused to stop for antifa road blockades are examples of the left's use of their control over the legal system in certain places to back up rioters. In addition, mob organizers know the national media will portray attacking rioters as peaceful protesters and victims, no matter what they do.
We can expect antifa and BLM to kill more, because local authorities excuse it, the media ignores or deflects it, social media will ban anything or anyone critical of the mobs and Democrats justify it.
The Rule of Law has not only collapsed, it is being weaponized against ordinary Americans who just want to go about their daily lives and not be assaulted, killed or have their homes or businesses looted and burned.
Posted by Sean Harshey at 9:25 AM