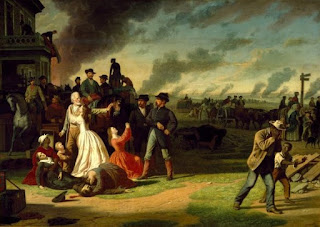 There's no question this is the most chaotic election cycle in any of our lifetimes. The last time there was this much chaos and uncertainty was during the 1860 election where the nation was hopelessly divided. No matter who won that election, things were so divided that neither side would accept an electoral defeat.

Abolitionists in the North were leading the brand new Republican Party and nibbling around the edges of severely limiting slavery, with the ultimate goal of ending the practice nationwide. Democrats, particularly in the South, were playing defense, trying to fend off the constant threats to the institution, such as making sure a slave state was admitted for every new free state that came into the union or engaging in pitched political battles or even armed conflicts within the territories to get it to come in as a slave or free state. If you haven't read about the fierce battles in Missouri or "Bleeding Kansas", you should read up on it. It's fascinating, and now seems eerily prescient, especially in light of the events we see unfolding on our TVs every day in 2020.

Full disclosure, I went on record back in 2012 predicting Barack Obama would lose that general election and got it completely wrong. Back when I was toying with a YouTube channel. My analysis was sound, my reasons were good...but I was wrong about the outcome. There was just no getting around how remarkably terrible a candidate Mitt Romney was, nor how energized the black community remained to supporting Obama. So you can take my analysis with a grain of salt. I've learned a lot since then, though.

Polls. The public ones are worse than useless. If you listened to my interview with the 'Anonymous Political Insider' on the Harsh Reality podcast (available here), you know that nobody who makes a living in politics pays attention to the public polls, except for their value in regard to fundraising or publicly motivating your base. So "Hey! Look how great we're doing in the polls! Get on the winning team and help us to victory!" or berating the polls as fake news by saying "We all know these polls are bogus! Get out there and vote and show them they're wrong!" The polls you see on your favorite cable show are meant for entertainment purposes and not taken seriously by professionals. As we saw in 2016 when every poll showed Hillary with absurd double-digit leads, the big polls are no reflection of what's actually happening with the electorate. They're a reflection of the opinion of the pollsters...who all HATE President Trump.

If you want to know what's actually going on, watch the campaigns. They'll tell you what the real polls are doing. When polls say Biden is winning in a landslide in some battleground state, but the Trump campaign is ignoring it and Biden is spending a lot of money...that's a great indictor that the professionals in the campaigns know Trump is leading and Biden is playing catch-up. It's very often the exact opposite of whatever the nightly news is reporting.

As of now, Donald Trump and republicans are on offense everywhere across America. You know this because they are attacking at every opportunity and all the energy is with conservatives. Liberals are burning things down, but business owners and hardworking Americans are becoming more entrenched every day in their support of the President.

Biden, who's supposedly winning in a blowout, is on defense everywhere. He's got Bloomberg spending $100M to help him win just in Florida. A state in which major media tells us Biden has a major lead. He wouldn't be spending major money like that in a state he was already winning.

Have you noticed things that make you think it's impossible Democrats can win the White House this year? Anecdotal observations are the worst kind of indicators. But they were right on the money in 2016 and seem to be signaling the same thing in 2020. I hear from people all the time that they don't see anyone supporting For Biden or Democrats and a gazillion signs, or whatever, supporting President Trump. The problem is there are a bunch of people on the other side who have nice idea who on earth is voting for Donald Trump because everyone they know and see around them all hate the guy. But there's something to the Trump phenomenon. All the yard signs, Trump flags, boat parades, etc. If you've traveled across America, you've no do doubt noticed the vast majority of American real estate dominated by signs of support for Donald Trump. There's a joke floating around on social media on this very topic. It has to to do with some person counting yard signs on a trip and concluding Joe Biden is losing to both Trump and 'Yard Sale' (or "sweet corn" or whatever). In 2016 the lovely and gracious Mrs. Harshey did a similar survey when we rode our motorcycle through the American midwest and noted a 50-1 preference for Mr. Trump. She couldn't imagine any possible way Hillary Clinton could win the presidency. But anecdotal observations are tricky. It follows the same basic pattern as 2016, though. The wealthy urban areas will vote for Democrats and the rest of America will vote for President Trump. The big difference this time is a lot of "nice white people" in urban areas and a larger percentage of blacks will pull the lever for Donald Trump.

So, what is my official prediction (subject to change)? President Trump wins reelection in a similar manner as 2016. He'll win big in the Electoral College, but Democrats will cheat with fake ballots, multiple voting, illegal alien voting, etc. Democrats will win the popular vote by some ridiculous margin. It will be enough for them to claim an overwhelming popular vote win and denounce the Electoral College as a sham and an obstruction to the real presidential victor.

This is where the real fun begins. What happens after Trump's electoral victory?