Marxist Tentacles are Manipulating Your Retirement 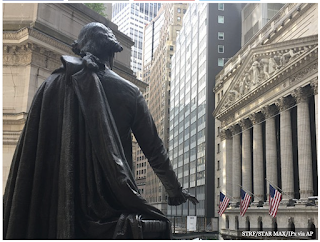 Most people know the American educational system is riddled with anti-American propaganda. The universities were the first to fall to Marxism and become saturated with hatred for our country. Eventually the K-12 teachers being churned out of these politically correct cesspools infected schools across our country and spread the disease throughout the curriculum and textbooks and education culture.

The media was another low-hanging fruit snatched up by leftists decades ago. Liberals took over journalism schools and gave preference to their little leftist copies and turned the rest through relentless propaganda. So news, entertainment...everything on TV and movies has only one, approved  ultra-liberal worldview. Seriously, if you differ from any liberal orthodoxy whatsoever it's tantamount to calling yourself a Nazi. So everyone in media trips over each other trying to be more leftist than everyone else.

Corporate America has succumbed to a combination of ultra-left woke students pouring out of colleges and into the workplace along with pressure from liberal groups to pledge support for every social justice cause imaginable. One after another, they change their corporate brands and logos to the trendy liberal cause du jour and write massive checks to leftwing political groups. Peer pressure? Extortion? Who knows? It's probably a combination. So work life for most Americans is now a corporate-imposed version of the political correctness we see in media. Don't step out of bounds or imply some wrongthink in the break room! Or on social media. Especially on social media.

With Major League Baseball joining the parade of sports proclaiming their contempt for America, with leftist political messaging plastered all over stadiums and even on the field, even sports is taken away as a refuge from liberal politics.

At least you have your retirement, right? Not really.

The U.S. Labor Department recently proposed a rule aimed at reigning in so-called "ESG" investing. That stands for Environmental, Social & Governance. Basically, it involves steering investment to products based on how socially responsible a company is. So, for example, a pension fund manager might avoid investing in companies doing business with mining interests (bad) and toward a solar energy concern (good). This dynamic works in reverse, too, though. Companies not inherently good or evil in leftist's minds, can earn brownie points and attract investment by taking steps to be more liberal in some way.

The Labor Department is reminding pension fund managers that they are required under the Employee Retirement Income Security Act of 1974 (ERISA) to act strictly in their investors' best financial interest. That means numbers. Not political correctness. Not wokeness. Not socially responsible. It is a fiduciary duty. What is the best investment of the client's money? ESG investing, by its very nature, is not in the best financial interest of the investor. If it were, it would be self-evident. But ESG presumes investments will be passed up that may produce a higher return, in favor of investments with a lower or riskier return based on a subjective judgment or political preference. This is a direct violation of federal law.

Of course the left is having a meltdown. Not only is ESG a shortcut to access to funds that a company otherwise might not have access to, but the pension fund managers lose the power to manipulate corporate policy, as companies seek new ways to prove they're good liberals. In an article at Breitbart,  winter Justin Danhof cites a certain investor group that pressured Macy's and Progressive insurance to increase their support for abortion. A person at the investment openly spoke of using their investment leverage to force companies to take a political position on issues that may have nothing to do with their business.

The Trump Labor Department is seeking to restore sanity and take political calculations out of investment decisions where someone is controlling other people's money.

The left infects and destroys everything it touches. If it seems like they're touching absolutely everything lately, you're not alone.