Why is Hilary Still Everywhere?

I am not being partisan in asking this question: Why is Hillary still everywhere? 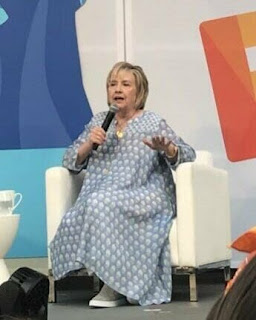 From the milk aisle at Costco signing books for a crowd of 8 people to TV shows vomiting wacky conspiracy theories for her cat-lady and pierced-septum voters to gobble up. She obviously has health issues and I'm not saying there isn't a place for her commentary or whatever in the future as a historical figure when she's got her health problems under control.

Nobody ever heard from Gerald Ford, Walter Mondale or Mike Dukakis after their election defeats. George H.W. Bush spent his years after losing in 1992 joining with Bill Clinton on various projects. John McCain went completely the opposite direction and was BFFs with Obama. He's spent the past 10 years attacking anyone as a racist who isn't happy with the Obama train wreck.

It's simply puzzling what she thinks she's doing. Like an aging movie star whose time has passed but keeps trying to continue living her glory days, desperate to try to convince people she's still as good as she ever was.

She topples over like it's her job (credit to another writer for that observation, but I cannot locate the original use of that line. -Sean) and she's wearing progressively more embarrassing clothes out in public to cover her medical devices or equipment or whatever. Does she not have anyone around her to speak truthfully to her and suggest she take it easy for awhile and get healed up?

Posted by Sean Harshey at 3:03 PM No comments: